Have your say on the £4.5m investment proposals for YGG Aberdâr 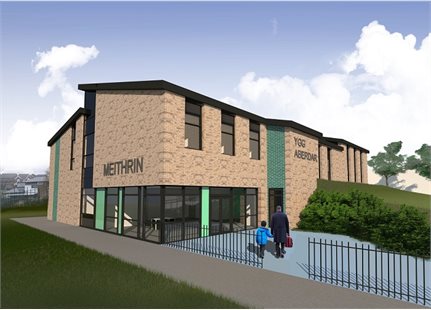 Residents can view detailed plans and have their say on the Council’s £4.5m future investment at Ysgol Gynradd Gymraeg Aberdâr – to deliver a significant extension and a childcare facility in partnership with Welsh Government.

Cabinet Members have previously agreed a £23.9m investment in education for the Cynon Valley, using Band B funding from Welsh Government’s 21stCentury Schools and Colleges Programme. This includes a significant £3.69m investment for YGG Aberdâr in Cwmdare, to increase the school’s capacity in response to the growing local demand for Welsh Medium primary places.

The proposal is to provide the school with four modern classrooms and an additional play area, along with extensions to the existing hall and the school car park. Two temporary classrooms are currently being used by the school and these would be removed under the plans, resulting in an overall gain of two classrooms – increasing the school’s capacity by 48 places to 480 (including nursery places).

The Council will also consult residents on a separate £810,000 investment, secured from Welsh Government’s Welsh Medium Capital Grant, to create a new 30-place Welsh Medium childcare facility on the school site. Both elements of the overall £4.5m investment would be delivered by 2022.

A public engagement exercise has now been started by the Council, in order to gather the views of residents on the proposals. The feedback received will be used and considered in the planning process for this investment scheme.

The consultation will end on Friday, February 26, and residents can take part via email or by completing a form to be submitted via post. Further information on how to take part, along with detailed plans of the proposals, are included here.

Councillor Joy Rosser, Rhondda Cynon Taf Council’s Cabinet Member for Education and Inclusion Services, said: “The exciting £4.5m investment proposals for YGG Aberdâr will deliver new internal and external facilities at the school, in one of our latest 21st Century Schools projects. The Council has recently delivered a new £10.2m school for Hirwaun Primary in partnership with Welsh Government, while Ysgol Rhydywaun and a number of schools across the Greater Pontypridd area will also benefit in the near future.

“Cabinet Members recently considered the Council’s investment and commitment to expand Welsh Medium education in Rhondda Cynon Taf, as outlined in its Welsh in Education Strategic Plan. There are 28.1% surplus places across our Welsh Medium primary schools, but the Council is taking action in areas where demand exceeds capacity – with the proposed £3.69m investment for YGG Aberdâr, to create 48 extra places, an important example.

“Another Council priority in this area is increasing the quality and availability of early years Welsh Medium provision, co-located at primary schools – and the £810,000 funding secured from Welsh Government will create a dedicated Cylch Meithrin at YGG Aberdâr, alongside the 21st Century Schools work.

“The proposed investment aims to deliver important improvements for staff and pupils at YGG Aberdâr, and the Council will welcome feedback given by members of the public in the consultation process. The views received up until February 26 will be a key consideration as the project moves forward.”