In November 2020, Chief Constable Matt Jukes will take up an appointment with the Metropolitan Police as Assistant Commissioner, initially responsible for the Met’s transformation programme.The Chief Constable said: – 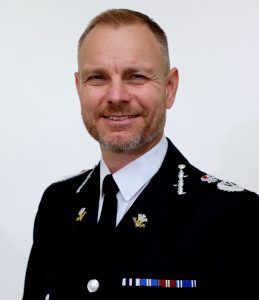 “I joined South Wales Police ten years ago and I have never looked back. It has been a tremendous privilege to hold senior leadership positions in the Force; since 2013 as Deputy Chief Constable and then, from 2018 as Chief Constable. In that time, I have seen so often the care and compassion of colleagues, and the strength of the South Wales Police family.“Working with colleagues in South Wales and with our communities has been tremendously rewarding. Despite the many challenges we have faced together, our people have proved themselves to be capable of keeping local communities safe and policing major international events.“And South Wales Police has made a real mark on me. There will definitely be a bit of me that is ‘Cymru am byth’ as I move on to protect another capital city and to keeping London safe.”From 7th November 2020, Deputy Chief Constable Jeremy Vaughan will be Acting Chief Constable for an interim period, and Assistant Chief Constable Jenny Gilmer will be Acting Deputy Chief Constable. Other interim positions will be announced in due course.The Chief Constable added: “I would also like to take this opportunity to thank our Police and Crime Commissioner, Alun Michael for his support and for his commitment to working together to protect the very best features of South Wales Police, as well as to promoting fresh perspectives and innovation. On a personal note, I am grateful to Alun for placing his confidence in me and appointing me to a position that has been a tremendous privilege”.The Police and Crime Commissioner for South Wales, Alun Michael today also announced the start of a process to appoint a new Chief Constable as soon as possible to succeed Matt Jukes.South Wales Police and Crime Commissioner Alun Michael said:“Matt Jukes has been an outstanding leader of South Wales Police and I want to thank him warmly for the significant developments that we have seen during his time at the helm and the positive direction in which the force is heading. In so many areas of activity, South Wales Police is a beacon force which is a credit and a reflection of Matt’s leadership and strength of the chief officer that he has built around him.“When I appointed Matt as Chief Constable, I knew we had the right person to lead us on through some very difficult financial challenges and the team has continued to evolve and adapt in order to face and embrace new challenges. He has led the force with great integrity, professionalism and personality and has shown a strong personal commitment to the communities of South Wales and in supporting the officers and staff who work tirelessly to keep us safe and confident. His appointment by the Commissioner of the Metropolitan Police is a massive endorsement of Matt personally in selecting him to take on an even bigger role with a national dimension but it also recognises the quality of our local police service in which we can all be confident for the future. He goes with my thanks and warm best wishes for the future.“I am determined to move quickly to attract applications and to make the appointment of a new Chief Constable who will need to be a man or woman capable of building on the firm foundations laid by Matt and continuing the ambitious programme that we have set out to deliver together. We achieved that level of ambition, vision and continuity when Matt took over on the retirement of another outstanding Chief Constable, Peter Vaughan, and I believe we can do it again. The vacancy will be advertised through every available channel and I will again be putting in place a challenging selection process for the appointment.“The process to appoint a new Chief Constable will begin immediately and such an important appointment will involve a rigorous selection process with a high level of involvement from our partners and scrutiny through the Police and Crime Panel. I am confident that, with the right leader, the South Wales Police team is in good shape to take us to an even higher level, working ever closely with partners and communities across South Wales.”To view Matt’s biography please click here

Police in Aberdare are appealing for information following a burglary at Ysgol Gyfun Rhydywaun, Hirwaun.