Cabinet Members will receive a progress report on the future A4119 dualling scheme – including an important update on proposals for a new Active Travel bridge at Coed Ely roundabout.

At its virtual meeting on Friday, December 18,Cabinet will consider an Officer report outlining a progress update on the scheme, which will see a 1.5km section of A4119 Ely Valley Road increased to a dual carriageway in both directions, from Coed Ely Roundabout to Llantrisant Business Park in Ynysmaerdy. The scheme will significantly improve traffic flow at peak times. 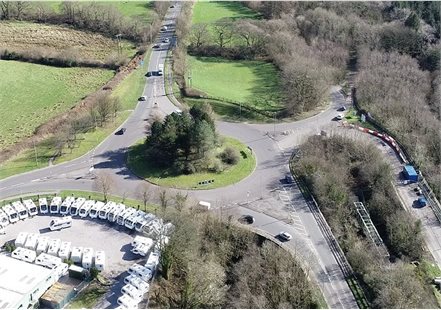 The Council recently provided an update on progress towards delivering the scheme in a future financial year. This included publication of a Compulsory Purchase Order on November 24 and, as part of ongoing design, an update that the A4119 roundabout near South Wales Fire and Rescue Service’s HQ will be retained. In total, £7.48m is allocated to the scheme, of which Welsh Government has contributed £1.33m via its Local Transport Fund.

Friday’s Cabinet report focuses on proposals to improve the current Active Travel provision at the northern end of the scheme, with pedestrians and cyclists currently crossing the existing single carriageway at Coed Ely Roundabout. Preliminary designs included the provision of an underpass as part of the A4119 dualling scheme, which would be Active Travel-compliant.

However, during the detailed design process, discussions have taken place with Welsh Government which is developing the former Coed Ely colliery site to the north of the roundabout. As part of that scheme, a shared pedestrian and cycle bridge is needed at the roundabout to link the site to the A4119. The Council and Welsh Government have agreed to work in partnership to provide this structure, rather than the underpass that was initially proposed.

Councillor Andrew Morgan, Leader of Rhondda Cynon Taf Council and Cabinet Member with responsibility for Highways and Transportation, said: “The A4119 dualling is an important Transportation scheme to ease traffic congestion and improve journey times in the Rhondda Gateway region, to benefit peak time commuters in particular. The northern end of the scheme will help unlock the former Coed Ely colliery site being developed by Welsh Government, which includes the Council’s new £3.93m modern business unit.

“The Council has committed to delivering the dualling in a future financial year, and important progress has been made behind the scenes throughout 2020 – including the progression of detailed design work, land negotiations and the recent publication of a Compulsory Purchase Order. On site activity has included ground investigations, trial holes and utility works.

“Cabinet will consider a report outlining an important specific element of the scheme, which would see a dedicated Active Travel bridge built at Coed Ely roundabout. It will enable pedestrians and cyclists to safely cross the road at this location, and will be delivered in partnership with Welsh Government, which requires the structure to improve accessibility to the colliery site.

“This is the latest major highways infrastructure project to be progressed by the Council, following on from the successful delivery of the Mountain Ash Cross Valley Link in recent months. A number of future schemes are also being developed at the moment – including a new bypass for Llanharan and proposals to extend the Aberdare Bypass in the A465 Cynon Gateway North scheme, which residents have recently been consulted upon."

This site is the showcase for, and maintained by, Penderyn Community Historical Society - based in the Brecon Beacons National Park, South Wales.We exist to ensure that the memories of Penderyn's colourful past are never forgotten.