A walk with the Wildlife Wanderer…

One of the UK's foremost wildlife photographers, David Bailey, will be publishing a striking collection of images in his first book,  Wildlife Wanderer.  To mark the publication, launch events will be held at the Drill Hall in Chepstow on 27 April and at the National Library of Wales in Aberystwyth on 6 May. 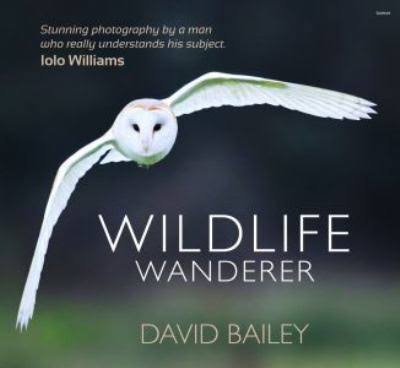 Tireless in his search for species and their habitats, David Bailey is also full of concern and care for those animals he photographs, earning their trust and the right to document their comings and goings.

With a soft spot for squirrels, hares and owls, for kingfishers, foxes and deer, his camera has captured many of the wildlife wonders of Wales and England. In this book alone he features over 50 different species, including otters and beavers, dolphins and dragonflies, hedgehogs and herons, puffins and peregrine falcons, salmon and seals.

Though he likes to let his pictures do the talking, David Bailey also has the odd word of advice for would-be wildlife photographers, some pointers for less experienced naturalists and plenty of personal anecdotes, just to remind us that he really has walked on the wild side.

In the foreword to the book Dr Rhys Jones says that "the life of the wildlife cameraman is anything but glamorous. I've spent many a day sat with Dave at remote locations, knowing what it is to be both frozen in winter and eaten alive by mosquitoes in the summer. A wildlife cameraman needs skill, saint-like patience and luck. However I'm a firm believer that people create their own luck in life and Dave's ability to read the landscape, coupled with his constant research into the lives of animals, puts him in the right place at the right time to secure that coveted photograph."

David Bailey says "I do witness some odd sights while quietly sitting in the hide: courting couples, drugs drops, joy riders, poachers. I’ve even frightened the life out of some innocent people stood near my well camouflaged hide, as I pop my head out of an opening to say hello."

"Working in the most beautiful locations, dealing with many wildlife projects and trusts, seeing wildlife which so many people will never set eyes on and meeting those with a love of animals, means that there is no such thing as a normal day. And I'm grateful for this. I often think I'm the luckiest person on the planet, and this book is my chance to share that luck with you."

David Bailey is hugely respected for his enthusiasm and expertise in the field –  he has been cameraman and consultant on the BBC series Rhys Jones's Wildlife Patrol and has appeared on Springwatch with Nick Baker. Such is his reputation that he received the Brand Laureate International Personality Award in 2016 in recognition of his photography. Though Dorset and the New Forest have claims on him, he now lives in mid-Wales.

It will be launched at the Drill Hall in Chepstow on 27 April. Tickets (£2) for the event are available from the Chepstow Bookshop on  www.chepstowbooks.co.uk

David Bailey will also be in conversation with Dr Rhys Jones at the National Library of Wales in Aberystwyth on 6 May. Tickets (£6) are available from www.nlw.org.uk

Culvert system upgrades to get underway in Fernhill

Work to assess the damage to Feeder Pipe footbridge in Abercynon