Should Cynon Valley have a direct bus route to Cardiff just like Rhondda and Merthyr?
Yes
88%
NO
13%
Total votes: 16

A public notice put out by Rhondda Cynon Taf Council yesterday that I posted on AberdareOnline caused a bit of a stir on social media with a few getting the fact wrong, unlike AberdareOnline.

If you actually read the notice it is clear in its wording  “intends to dispose of”, the definition of, dispose of: “to get rid of someone or something”

AberdareOnline headline  “Rhondda Cynon Taf intends to dispose of Aberdare Park Cafe and Boating Lake Aberdare Park Glan Road Aberdare” and that’s what it said in the notice, unfortunately, we don’t publish fake news, as implied by some on social media.

Councilor Andrew Morgan posted on Twitter “It’s just a legal statutory notice as its a public park, it’s simply to renew the cafe and boat lease. No changes planned at all other than looking to renew the lease as it due to run out. The term dispose unfortunately is the legal term. Things should just continue as is.....” 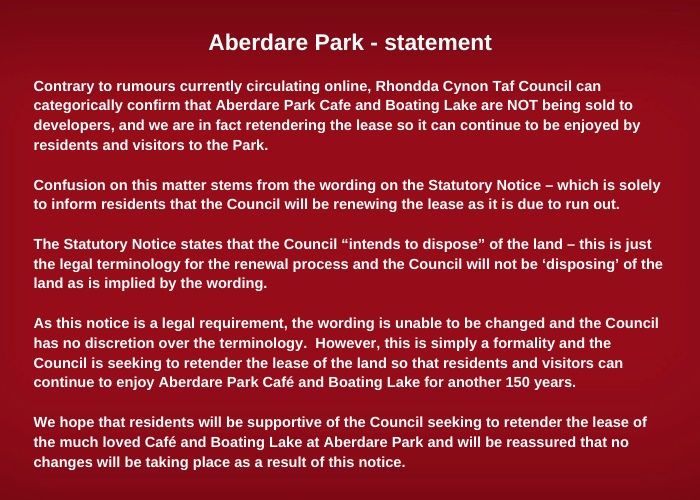 Notice is hereby given that the County Borough Council of Rhondda Cynon Taff intends to dispose of the following areas of land within Rhondda Cynon Taff which consists or forms part of an open space. Aberdare Park Cafe and Boating Lake Aberdare Park Glan Road Aberdare CF44 8BN cd/desgen - 05765 Any persons wishing to object to the proposed disposal should write to the undermentioned (quoting the relevant reference number) with details of the objection, such objection to be received by the undermentioned no later than the 22nd November 2019 Dated this 31st October 2019 Andrew S Wilkins Pavilion E The Pavilions Cambrian Park Clydach Vale Tonypandy CF40 2XX

A & E waiting times in Wales are the worst on record

In 2007, we built the national website, FixMyStreet.com. The aim? To make street fault-reporting as simple as it could be, both for residents and for councils. And it worked. Residents loved the easy interface; councils welcomed the shift to digital. Now we’ve developed FixMyStreet for Councils, allowing you to bring the award-winning FixMyStreet experience directly to your own council website’s users.