The Council will begin work on a flood alleviation scheme at Aberhondda Road in Porth to help tackle an existing drainage issue – utilising funding from #RCTinvest, Welsh Water and the Coal Authority. 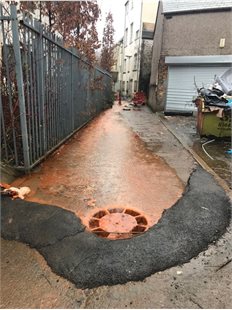 The £126,000 scheme, which will be delivered thanks to the combined funding sources, will begin in the week commencing Monday, February 25. It is part of the Council’s ongoing £23.6m Highways Capital Programme, which has allocated £300,000 to Land Drainage and Flood Risk Management schemes throughout 2018/19.

The scheme includes the installation of a new drainage system, which will assist in controlling an existing ground water issue affecting a footway at Aberhondda Road – which has the potential to affect the boundaries of nearby properties. The work is expected to last around nine weeks.

The Council has received £41,580 funding from the Coal Authority for this scheme, while £37,800 has also been received from Welsh Water. The Council has appointed Alun Griffiths Ltd as the contractor.

Works will take place off the highway and therefore no traffic management is required. Disruption to the wider community is expected to be minimal.

Councillor Andrew Morgan, Leader of Rhondda Cynon Taf Council and Cabinet Member with responsibility for Highways, said: “Alleviating the risk of flooding is a priority issue for the Council, and the upcoming work at Aberhondda Road represents the latest project to be delivered by the Council this year, thanks to a £300,000 allocation for planned schemes.

“At the end of January 2019, the Council began a scheme in Mountain Ash to alleviate the risk of flooding to the Trem-y-Dyffryn housing estate – and this followed a recently-completed scheme at Park Road in Cwmparc, and the first phase of a flood alleviation scheme at Bronallt Terrace in Abercwmboi.

“In addition to this investment, the Council also made a further £100,000 funding available to respond to the damage caused by Storm Callum last year, with further additional funding to be announced.

"The Aberhondda Road scheme will install a new drainage system to tackle an existing issue, and there is likely to be minimal disruption to residents.”

Practical Tips on Living with Dementia

The family of a man who died following a road traffic collision on the A465 on Monday evening (January 11) have paid tribute to him.

Do you own the land? at: Corner of Manchester Place / Longfield Cresent, Hirwaun, Rhondda Cynon Taf, CF44 9QE

A warm friendly welcome is extended to all. We are a long standing club based in the Cynon Valley of South Wales with a thriving membership and an exciting events calendar.
You may have only just purchased your first camera or be an "expert" who has been taking photographs for many years. Everyone is treated equally here . We all learn something new every time we come to a meeting.