The Council will shortly begin work to strengthen the culverts under Elm Street, Oak Street and Holly Street in Rhydyfelin – requiring a five-day road closure at each location, taking place one after another throughout October.

The scheme, funded via the Council’s £25.02m Highways and Transportation Capital Programme for 2020/21, will see structural linings installed to the three culverts to increase their strength and reduce degradation. A water chamber is also being installed in the park to the north of Oak Street in order to facilitate access – this element of the work has already started on site. 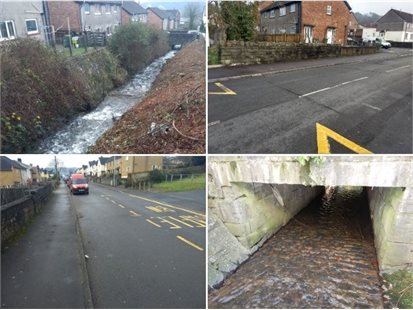 The majority of work will take place within the culverts, however, to ensure the workforce’s safety, the section of road above each culvert will need to be closed. Diversion routes will be clearly signposted for the following closures:

Waste and recycling will be collected as normal, but residents are advised they may take place later than normal for the first closure at Elm Street. Any further changes to collection arrangements will be communicated to residents.

Parked cars should be moved wherever possible on collection days – if crews cannot gain safe access then they cannot complete the collections.

The Council has recently appointed Centregreat Ltd as the contractor responsible for delivering all works associated with this scheme.

Councillor Andrew Morgan, Leader of Rhondda Cynon Taf Council and Cabinet Member with responsibility for Highways and Transportation, said: “This scheme in Rhydyfelin, funded through the Council’s 2020/21 Capital Programme, aims to strengthen culverts at three key locations within the village. They are among 1,500 highway structures in the County Borough which the Council is responsible for maintaining. Current structures schemes making progress include river wall repairs at Blaen-y-Cwm Road, Gwawr Street in Aberaman and at Ynysybwl Road – along with longer-term works at St Albans Bridge in Blaenrhondda and Castell Ifor Bridge in Hopkinstown.

“A number of flood alleviation schemes are also ongoing in local communities – including major schemes at Fernhill, Pentre and Trecynon. Work at Plantation Road in Abercynon and Bryn Ifor in Mountain Ash were completed earlier this summer, while the Council’s significant ongoing response since Storm Dennis has seen around 1,500 reports of flooding investigated, 30km of watercourse assets inspected and more than 1,000 tonnes of debris removed.

“The main work for the ongoing scheme in Rhydyfelin will cause some disruption locally, with separate road closures at Elm Street, Oak Street and Holly Street scheduled one after another to minimise disruption. The Council will work closely with its contractor to complete the scheme as quickly and efficiently as possible, while communicating any further messages to residents in relation to local bus route changes and waste/recycling arrangements.”

Don’t Let Me Fall Through the Cracks: Care-Experienced Young People and Homelessness in Wales